The Tabletop fire 10 months on 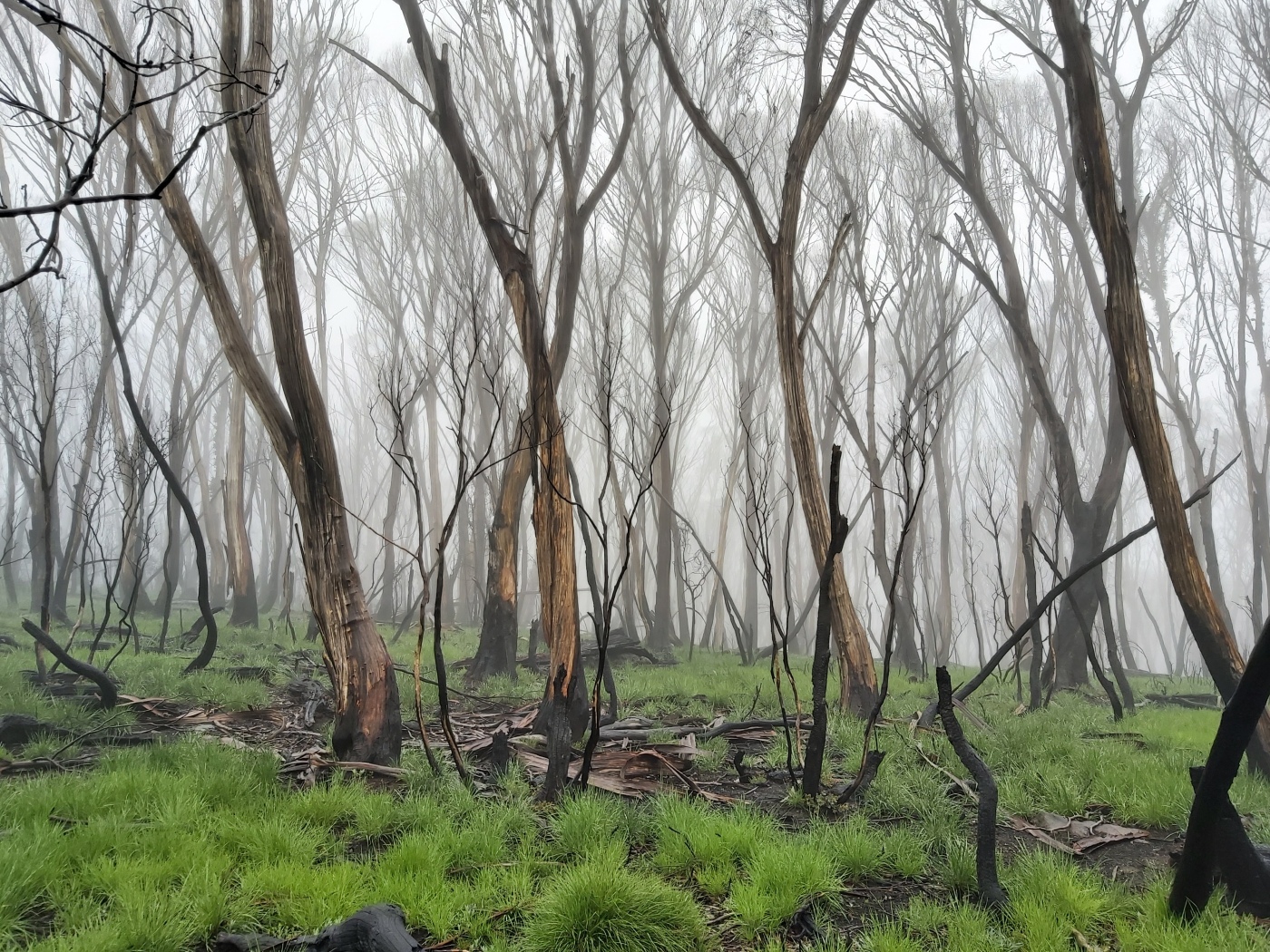 Mt Tabletop is in the Alpine national park, on Gunaikurnai country, between Mt Hotham and Dinner Plain. Its snow gum country that is already feeling the changes that are coming with climate change. The forests in the area have burnt in 2003, 2013 and 2019/20. Some areas have burnt 3 times.

The terrain is a mosaic of snow plains, old open forests, crazy regrowth in burnt areas, and multi aged woodlands. It was burnt badly last summer.

I’ve been back for another look at the Tabletop fire, which was started by a lightning strike on December 31, 2019. It went on to become an enormous blaze that threatened the village of Dinner Plain twice, and many houses in the Cobungra area. It also had significant ecological impacts, burning large areas that had been burnt previously, compounding the damage caused by earlier fires.

The most noticeable thing after a summer of growth (the last visit was pre summer – scroll down for images from November) was the incredible fields of tall grasses that now cover much of the burnt area. The growth has transformed the forest, and while it is lovely to look at, it hides the potential transformation of some of these forests away from snow gums to something else which is currently underway.

My key observations are below. I am not a scientist, and these are simply the observations of someone with a background in environmental science and botany and a keen interest in fire ecology.

The intensity of the fire was influenced by scale and terrain. The fire started on December 31 and didn’t seem to move rapidly for the first days. Flat and undulating areas that burnt closer to the ignition point look like the fire trickled through the landscape. Sometimes a walking pad was enough to stop the flow of the fire. As it left the saddle to the north of Mt Tabletop it burnt up a hill into a regrowth snow gum forest and the intensity was far greater. It then burnt slower downslope before burning hot and fast onto the Precipice Plain ridgeline. These areas are currently carpeted in thickets of grass, with some limited understorey species starting to show but very little snow gum seedlings or regrowth from the base of trees. Sections of this area seem to be heading towards loss of the snow gum canopy (as pointed out on the northern end of the Dargo High Plains, where fire frequency is impacting on the ability of snow gums to recover – scroll to the end of this story for details). With very limited wattle regrowth, it is not even clear what this country might turn into – potentially dead landscapes dominated by shrubs and grass.

Age of forest influences survival. Where there were older forests with an understory of ground plants and low shrubs, much of the canopy survived, presumably because there was limited mid level shrubs to act as a ladder to take the fire into the crown.

Dense regrowth burns hot but creates new growth. Areas of vigorous regrowth from previous fires burnt hot in the 2019/20 fire and killed off the remaining canopy in many places. However there has been vigorous regrowth both from parent trees and seedlings. Future fires would create a vicious cycle of thick regrowth that is very flammable, probably leading to eventual failure to regrow. This is consistent with what we know about keeping fire out of regenerating snow gum forests.

Previous fires in the area create dead wood, leading to hotter fires. This is an issue across much of the Alps where fires have occurred two or three times in less than two decades. It appears that there is some interesting detail in this statement. Observations in the Tabletop area suggest that in areas with log tangles caused by old burnt trees collapsing, the fire burnt hotter than in the surrounding area, which obviously impacted on seed stock in the soil. Many of these areas are exhibiting growth of understory species and snow gum seedlings, rather than being dominated by grass.

This landscape is now more flammable than before. We often hear the argument that fuel reduction fires will reduce fire risk. While a lot of woody material and living plants have been removed from these forests by the 2019/20 fire, it is now dominated by literally thousands of hectares of tall, dry grass, in a landscape dominated by dead, dry trunks.

The landscape scale of repeated fires is visible everywhere.  It is hard work walking through this country, hammered as it is by multiple fires. The way the land looks is changing as parent forests are burnt, and replaced by regrowth or other species such as grasses.

This was the twitter thread on my last visit.

Lightning strikes across the Alps on December 31 ignited dozens of fires, including at Tabletop. There were too many fires for crews to get to them all. The Tabletop fire grew for a few days, then made a run at Dinner Plain village on the 4th (the village was saved by a wind change), then the 11th (saved by a Large Air Tanker).

I hadn’t been into the core of the fire since March (here is a report from then). It was heartbreaking to see.  90% of snow gum forest in VIC has burnt in the last 20 years, some multiple times. The forest is changing because fire is now too frequent.

The Tabletop fire literally trickled through the forest in some sections, even on uphill sections. But others burnt hot and killed parent trees. All in all, its a depressing reminder about how the world is changing before our eyes. These forests are used to fire. But they are coming too often now, and its changing the land.

The image below demonstrates why we need to keep fire out of burnt snow gum forests. Thick regrowth after fire is highly flammable. Older forests are more open, less likely to see crown fire. But regrowth burns hot and is more likely to act as ladder to put the fire into the crown.

With fire seasons getting worse due to climate change, we need more air support to stop small fires before they become monsters.

Fighting the fires of the future Before this summer starts, we need a deeper commitment from the federal government for fire fighting.

One thought on “The Tabletop fire 10 months on”