This is one of the finest books written about the Australian Alps. Self published by Harry Stephenson in 1982, this compilation of essays about the development ok skiing in Victoria is exhaustive. Coming in at almost 500 pages, it must have been a massive effort. It is an incredible cultural history of skiing, based on a series of stories and recollections from key players in the development of skiing in the state. While we are generally offered a cattle grazing heavy history of the Alps, this book fills in details on some of the other actors in the early days of European settlement. 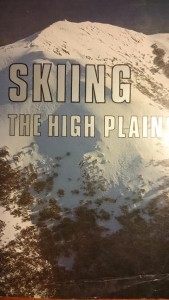 It’s various chapters cover the developments at key mountains across the state, from Buller and Hotham to Donna Buang, where skiing was popular in the 1920s. It doesn’t neglect wilder and more distant areas like Bogong or Mt Howitt. And it is inter-spaced with fantastic photo galleries by a range of photographers.

For anyone with an interest in the Alps, if you can get your hands on a copy, you’ll learn an incredible amount about the synergy between the early miners and the later skiers, as tourists started to follow old mining tracks into the mountains. In some instances – as at Mt Buller – the development of skiing was interlinked with the mountain cattle families.

Sometimes outdoor recreation is seen as a modern development, only adopted as people became wealthy enough to travel and had time available for holidays. What is clear from the book is that the settlers took to the hills early on for recreation, and a built a lot of infrastructure, much of which is now gone. There is no mention of traditional owners, which is probably indicative of the sources the editor is using – articles and reminiscences from the late 1890s onwards.

It features stories on some of the founding figures of Victorian skiing like Bill Spargo, Robert Wood Wilkinson – the ‘father figure’ of Vic skiing, photographer and active early member of the Ski Club of Victoria.

Some random bits of information from the book:

The nearer mountains and the opening of Hotham

One of the striking things about the book is the fact that, before easy access into the higher mountains, skiers were attracted to the hills nearer settlement in the upper Ovens and Kiewa valleys. So Feathertop and Mt St Bernard feature heavily in the book. The Feathertop bungalow was established in the mid 1920s, with accommodation for 30 people and even the ‘Feathertop snow carnival’ seeing races on the mountain in 1923. Access was from Harrietville, using pack horses to carry the heavy gear.

Then there was the St Bernard Hospice, located near the intersection of what was to become the Great Alpine Road and the track to Dargo. In the 1890s, it was billed as being only a ‘six hour drive’ from Bright. After gold was discovered near Omeo in the early 1850s, people flooded to the mountains. There were many short lived gold mining operations south of Hotham such as at Grant and Crooked River, and the tracks to the diggings slowly became more used until a road passed between Harrietville and Omeo, with a track leading southwards over the Dargo High Plains to Dargo. There were a number of isolated hotels serving thirsty diggers. The Dargo road intersection became increasingly significant and in 1863 the St Bernard Hospice was built at the road junction. It existed for many years under various owners. A herd of angora goats kept the travellers in milk and meat and in 1873, when the alpine road was properly surveyed and then constructed, its role became even more important as the traffic increased. The road then became a mail route over the mountains to the gold fields at Omeo. What was to become the great alpine road (GAR) superseded an earlier pack horse route called Dungey’s track. The GAR was completed in 1883, with a regular coach service starting in 1884, and mail service starting in 1886 (this was sometimes delivered on a combination of skis and snow shoes). Sometimes the coach would be left at the snow line and there are accounts of the trip up from Harrietville taking up to 19 hours. If people were heading through to Omeo they would spend the night at St Bernard before doing the crossing over the higher mountains. Like many of the refuges and accommodations in the mountains, the era of the hospice came to an end in the fires of 1939. Some of the people working at the time at the hospice survived by huddling under wet blankets in a gravel pit near the buildings.

The end of the mining boom meant the GAR was used less frequently, but increasingly it was people seeking mountains and snow rather than gold who ventured up from the surrounding vallies. From the mid 1920s onwards there was growing interest in skiing and Bill Spargo moved into the area, initially as a Country Roads Board (CRB) worker. He set up a guest house at Hotham Heights. The Ski Club of Victoria dated from these days. In these days there was a network of places offering rough accommodation: Rundells down towards Dinner Plain, the Bungalow Chalet off the Razorback, Dibbins hut down in the Kiewa, and the St Bernard Hospice. It was generally a 3 to 4 hour ski up from the hospice to Hotham Heights, following the top of the ridge-line, as the road cutting itself would often fill in with snow. It became popular to ski over the top, finishing in Omeo. Many epic trips happened, with the first winter traverses of the Bogong High Plains, and the High Plains to Hotham. Without snow moving equipment, the roads closed when the snows came, often in late May, not to be re-opened until the end of October. The epic winter of 1922 saw the GAR not opened until January, when a gang of men spent more than a week digging out the snowdrifts as the road passed over Mt Hotham. The guest house at Hotham Heights was managed for many years by Bill Spargo. 1927 saw a record winter, when more than 20 feet of snow was recorded. There are regular descriptions of avalanches on the southern slopes and photos of Marys Slide from this era show large cornices and a low snow line.

In 1932, the Hotham Heights establishment was handed over by the CRB to Vic Railways (Bill stopped managing the guest house about this time). He survived the later fires in 1939 by diverting a stream through a corner of his hut, and went on to find the gold reef on Mt Loch that was eventually to support the Red Robin mine.

Until 1933, most people approached Hotham Heights from the St Bernard Hospice, which meant an exposed trip over mountains like Blowhard. The Bon Accord Spur was suggested as a less exposed alternative. While there was a better track up Champion Spur, which met the Razorback closer to Feathertop, there was a route up the Bon Accord from the gold mining days, so it was re opened for skiers. It even had a sledge service for a time, which ferried supplies up the mountain. It was much shorter than the GAR, and avoided the high section over Renes Lookout and Mt Blowhard.

By the mid 1930s, cars could travel up the GAR as far as the snowline, but in spite of this the Bon Accord route grew in popularity despite a steep grade and the need for packhorses to ferry gear up the mountain.

The fires of 1939 brought this era of adventure to an end. The Bon Accord and Feathertop huts were destroyed, as was the Hospice.

Over time, the buildings at Hotham Heights turned into the village we know today. Having an easy drive up the mountain to the resort has changed how we relate to the wonderful high ridges between St Bernard and Hotham itself.

Buller also has an interesting ski history, which was linked in with the cattle families who summer grazed cattle on the peak, the Lovicks and Klingsporn. In the early days the road finished in the upper Delatite below what is now Mirimbah, so access onto the mountain was up Klingsporn Spur. A ‘chalet’ (a large bush hut) was built in the 1920s on the upper sections of the mountain, to be followed by various huts in the mid 1920s. Ski championships were held from 1926, and the Cow Camp hut was established in 1930, followed by the Ski Club of Victoria hut on Boggy Creek. Clearing was carried out to develop longer ski runs, and there were even plans to build an aerial lift up the mountain from the Delatite. A road up the mountain was completed in 1939, and more lodges started to appear after that, as access got a lot easier. Summer grazing licenses were lost as the ski fields developed. 1929 saw the first winter ascent of the adjacent Mt Stirling as people looked for new terrain to ski.

The Chalet was burnt down and after the second world war, accommodation was short on the mountain. This lead to an era of ‘squatting’ as many different groups set up camps and even brought caravans up the mountain. In around 1948 or 9, the Forestry Commission, who were in charge of the mountain, decided to let the ‘village’ run its own affairs via a committee of management. Thus the first official alpine village was established. 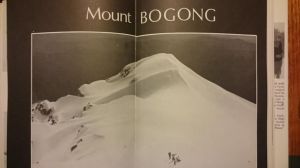 Other voices and epic trips

There is a great section on early women skiers, and a fair bit of history on the High Plains and the connection with the cattle grazing families, and many of the early tragedies in the mountains, including the trip that saw the death of Cleve Cole on Mt Bogong.

As skiing became ever more popular, various development proposals were put forward. There were plans at one point to develop Bogong, in the mid 1930s, with proposals for various huts, a road up the mountain, and the clearing of the Staircase Spur to create ski runs.

One of the trips that really stands out is a journey from Glenmaggie in Gippsland up to Mt Wellington in 1936. Sleds were used to carry gear across the high plains, then the group followed the main range north past Benison and the Howitt Plains to Mt Howitt, finally descending after heavy snow falls to the Upper Howqua. The river was in flood, making downstream travel slow and hazardous. The group ended by walking out of the the Howqua valley to Merrijig.

Long out of print, you can still find this book occasionally in second hand book stores.