More recent films at the top. 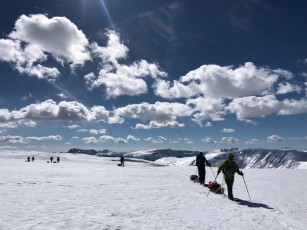 This is a series of links to the 2019/2020 backcountry films that have a human powered / low carbon focus.

Films include Roadless, Shelter, Electric Greg, The Headwaters, Endless Winter 2, Land of No Use and Close to Home.

“In 2012 seven adventurous skiers explored the Australian High Country. They camped, skied and filmed across one week’.

This short film is the result. Focused on the experience of climbing and riding on Mt Bogong and its ‘camo snow’, OFF GRID is a celebration of Australian backcountry skiing and boarding.

Check here for additional information and link to the film.

In a world where a big part of living the ‘dream’ is to have the ability to travel wherever you want wherever you want, a decision to stay at home and enjoy your own back yard becomes a radical action.

In this film athlete Justin Lamoureux  sets out to ride all 30 mountains he can see from his backyard.

Described as “the first climate-friendly ski and snowboard film, STEPS, is now available online for everyone to watch. STEPS is there to show us how we can snowboard and ski in harmony with nature – without giving up any fun”.

Backcountry ski and snowboarding films. A few quick reviews of some of the best backcountry films, including Powderwhore and Sweetgrass Productions  and Jeremy Jone’s first films (2013).

This film is billed as the best selling ski film of all time. One that ‘compares the challenges of big mountain skiing to the challenges of climate change’. I liked its trailer, which did seem to be saying something about over consumption and energy. As a backcountry skier and climate campaigner, I was stoked when I finally got to watch it, a few years after it came out.

Yes, its beautiful, compelling and also great fun, covering some of the finest skiing terrain on the planet. There are great people skiing incredible lines, and having a lot of fun doing it. There is an urban skiing scene that is one of the best clips I have ever seen in a ski film.

But in its claim that it is tackling the climate change issue, it is also a dangerous piece of propaganda for ‘business as usual’ capitalism. I am amazed that the film wasn’t paid for by coal companies. How can a group of switched on people get it so wrong?

My review is available here.

‘Winter Dreaming: an Australian Alps freeheel film’ (released in 2008) is both a telemark ski film and a celebration of the fleeting miracle of cold and snow on our old, flat continent. As was noted by Barry Park, in the Age newspaper, it is “part documentary and part eye-candy”. Produced by Stephen Curtain.