When I was in primary school, one of my favourite TV shows was about a guy who lived in the mountains in North America in the 1800s. I can’t recall its name, but it was kind of like a hippie version of Doctor Dolittle. He lived in a cabin in the woods, hung out with a lot of cool animals, and each show had a nice ‘what did we learn today’ wrap up at the end.

When I trace my life long obsession with high places and alpine environments, that’s about as far back as I can go. And I know that that show, and later influences, set me on a path: I wanted to try and live that clean life, out in the backcountry. At 12 I did my first overnight hike, at 18 I climbed mountains in New Zealand, and the memory of when we finally managed to summit on Mt Aspiring is as fresh now as it was then. At 20 I found myself in a small town in eastern Alaska, helping to renovate a cabin and looking up at the Wrangell Mountains in joy and disbelief. I think my longest solo trip was at 22, when I set off from Cradle Valley in Tasmania under a massive load, heading south to immerse myself in pure mountain spirit. I was determined to try and live that dream of going Out There and finding myself. My guides were a handful of books and not much else. What I found was a lot of loneliness and truck loads of challenge. During that month, I walked over mountains, passes, and valleys where there were no trails. I was almost washed away crossing a river. I found some people lost and delirious in the snow, and saved their lives by guiding them to a hut, warming and feeding them. Each week, when I came back to the Overland Track to stock up from my stash of food and gear, I was starving for human company. At times I was more than a little crazy.

But I also found a lot of magic. Long, long days of walking and climbing, sitting and thinking, drawing and dreaming. I was completely immersed in the mountains around me, and the slow cycle of the days as the sun followed its arc across the sky. I felt empathy, grace, wonder, simplicity, gratitude, and some alignment with the bigger flow of the universe. Life felt real and immediate. I was fit and I trusted my ability to cross terrain, to hop boulderfields, navigate and climb, and sit in silence and just be with myself.  I mostly liked the person I met out there.

I am a social person. And I know that we live in, and need, social networks. But I am always drawn to the Buddhist concept of ‘retreat and return’ – going into the inner realms to then return to society with (hopefully) insight and wisdom.

That trip, and my many attempts to live that simplicity in the sharp realness that I find in the mountains often skirts around the edge of my dreams. Nowdays I get my fixes through lots of shorter adventures in the mountains. I still try to live by the vision I was chasing way back then.

Some of my best times in the mountains have been in the company of good friends. My backcountry experience is now as much about the people I travel with as the terrain we travel through. 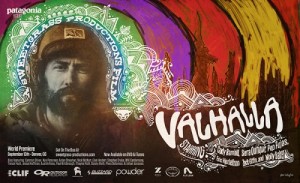 So, you can imagine my astonishment when I finally saw the latest offering from US-based Sweetgrass productions, which brought these various passions together. Mountains. The quest. Friends and community. Skiing.

Sweetgrass brings a particular sensibility to the ski/ snowboard genre. Unlike a lot of the mainstream snow industry, its not about helicopters and super stars. They say: “We hope that on the wings of our films, babies are born and dictators are overthrown, laughter is heard, tears are shed, and smiles are shared in the dusty beds of backroad pickups. That through the strange alchemy of aesthetic, story, and stoke, our films inspire people to explore the mystery of their own canvas”.

Two years in the making, Valhalla is way beyond your normal ski film and its almost as if the usual eye candy of skiing/ boarding big lines is used to entice you in, and covers a deeper story. The premise of the film is that as we get older we lose our passion for life, that sense of wonder we have as a child, but can look for it again:

‘The weightlessness of youth: every breath radiates opportunity and hope; every sense thrives on the wealth of the present; every thing whispers of brilliance and awe. When you’ve seen the season’s first great snow through the eyes of a child—you’ve known true happiness. But what happened to that simple joy? Where do we find the freedom that time and wisdom stole away?

Valhalla is the tale of one man’s search to rediscover the freedom of his youth. Feeling the distant heat of it’s fire still burning in the mountains of the frozen north, he goes in search of those tending the flame—the untamed, the wild, and the outcast dwelling on the fringe’.

In some ways, the trailer to the film doesn’t do it justice. The film itself is less serious and a lot funnier. One of the things I love about Sweetgrass films is their attention to detail and it is as if every frame has been considered and re-considered for sheer beauty, light and aspect before being filmed. No one can do ‘snow falling in a forest’ like Sweetgrass. And the skiing and boarding interludes that are cut into the narrative are usually tight and fleeting, rather than lingering on long lines, so its satisfying, while making you want more.

The film follows Conrad as he awakes in the desert, realising he has lost his passion and wonder for life. He decides to drive his VW Beetle north, eventually finding a mountain community of skiers, called Valhalla. As explained in the film, Valhalla is a camp on a mountainside, where “the untamed, estranged, (and the) wild few tend the flame.”

Yes, its hippies in the snow, getting nekkid by the fire, meditating on hill tops and generally following the dream. But the humour is disarming and its sweetness really is wonderful. There are some fantastic skiing scenes. The soundtrack is mostly ’70s era psychedelic and rock. And I was impressed that the naked guy doing a 360 jump on skis was wearing an avalanche beacon. Its better to be safe then sorry, I reckon.

As spring arrives, Conrad heads further north, to Alaska, where he has the final revelation about life – kind of a nice Taoist epiphany – and then heads back south to his new life, still in thrall to the ‘timeless flow’ of the mountains. The resolution to all his questing sat well with me, and made me feel strangely calm and at ease with where I find myself. The ‘eyes of youth’ aren’t meant for youth alone, and you can always find ‘brilliance, awe and magic running through life‘ if you wish to see it. Amen to that.

The final images, set in a spring time forest are absolutely gorgeous, and the skiing scenes have to be seen to be believed (its worth checking the extras on the DVD to see how they managed to film this section). The take-home message is Find the Magic, where ever you are. 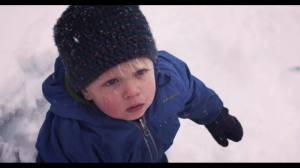 Valhalla is like a psychedelic version of Into the Wild, but with a lot of skiing, a bit of nudity, a happy ending, and a simple message: Go out there. Find yourself. Bring yourself back and find your Place.

Go and see it.

I crave the alpine and big, inspiring mountains. Our mountains are old and slow, worn down and mostly tree covered. But they feel like home in a way that is hard to describe. This country, this landscape, is home for me.
A ray of light over a charred landscape. Buffalo plateau.
Snow gum elders and granite, Mt Wills.
Survivors. Mt St Bernard.