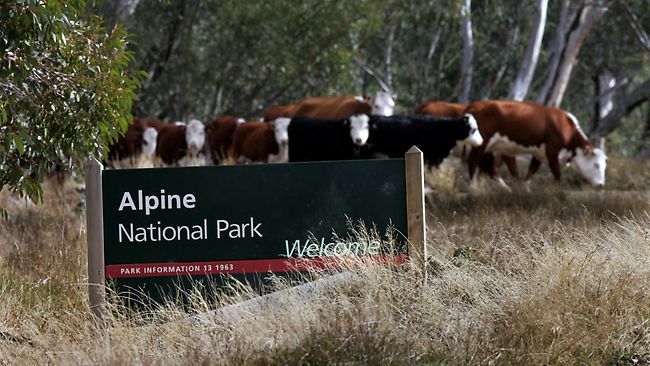 The Nationals candidate for the federal seat of Indi, Marty Corboy, and federal Liberal candidate Sophie Mirabella have called on the Victorian Labor Government to resume an abandoned scientific trial of high country cattle grazing. This was reported by The Weekly Times. If you think this is a bad idea, there is an online poll attached to the Weekly Times news story.

END_OF_DOCUMENT_TOKEN_TO_BE_REPLACED

Roger Good was a well known, deeply dedicated alpine ecologist. He passed away in October. He was a member of the Carruthers Group – a group of eminent alpine ecologists and scientists – which was active around the issue of alpine grazing.

END_OF_DOCUMENT_TOKEN_TO_BE_REPLACED

The following comes from the Victorian National Parks Association.

Quite some time before cattle grazing was banned in the Alpine National Park, ‘Soil erosion and vegetation damage and disturbance in the alpine regions of Victoria caused by cattle grazing’ was listed as a ‘Potentially Threatening Process’ under Victoria’s Flora and Fauna Guarantee Act.

The draft Action Statement required by that listing has now been prepared by the Department of Environment, Land, Water and Planning (DELWP).

END_OF_DOCUMENT_TOKEN_TO_BE_REPLACED

Having seen cattle within various sections of the Alpine National Park over the years I have wondered whether they are cattle that have not been collected when herds have been removed, or whether its been illegal grazing. The comments in this story from Kath Sullivan in The Weekly Times are interesting. A farmer says of cattle found within a national park “I can’t lay claim to them because they’re not earmarked, but I can claim an interest in them”.

SHOOTERS will be choppered into the Snowy River National Park, in East Gippsland, to destroy feral cattle.

Parks Victoria district manager Will McCutcheon said 10 cattle remained in the park. “Parks Victoria had recent success with helicopters used to locate the cattle and drop skilled shooters into remote, rugged sites, where access has been an issue,” he said. “With another helicopter operation we hope to remove the last of the cattle over the next few weeks.”

Gordon Moon, a farmer at Black Mountain in East Gippsland, was “devastated” to learn of the cull. His family owned a cattle-grazing lease in the park before cattle grazing in national parks was banned. When asked if the cattle could be his, Mr Moon said: “I can’t lay claim to them because they’re not earmarked, but I can claim an interest in them.

“I’d think it’d be costing squillions to cull them.”

Victorian National Parks Association spokesman Phil Ingamells said: “They (cattle) are not meant to be there.”

In an update to our recent report on the Victorian government introducing legislation to ban cattle grazing in the Alpine and Red Gum national parks, it now seems likely the legislation will pass through the Upper House.

The ALP controls the Lower House but will require at least two additional Upper House votes to have the legislation approved. The Weekly Times is reporting that this is now looking likely:

Many Upper House MPs still expect the Government to succeed despite its minority position.

At least two of the five cross-benchers are expected to join the ALP and Greens and vote the Bill through after it clears the Lower House.

While all minority parties say they are still waiting to see the legislation’s wording, Sex Party MP Fiona Patten said she was likely to support the ban, as was Democratic Labour Party MP Rachel Carling-Jenkins.

In perhaps the final act of the long running alpine grazing saga, the Victorian government has introduced legislation into Parliament banning grazing in the Alpine National Park, as well as in the River Red Gum national parks.

END_OF_DOCUMENT_TOKEN_TO_BE_REPLACED

The following comes from Rob Harris at The Weekly Times. It’s always amusing to see the mountain cattlemen’s association representative bemoaning the fact that the issue has become ‘political’. Does he honestly want to say that it wasn’t a ‘political’ act when the Coalition originally rushed cattle into the Alpine Park in secret without having an actual scientific plan around the grazing trial? Of course not, its been about politics from day one.

What is telling from this report is the fact that the Coalition government classified the first year’s grazing results as being “cabinet-in-confidence”. This makes it difficult for the findings to be put into the public domain. If the results supported the argument that ‘grazing reduces blazing’ why wouldn’t they have made them public?

END_OF_DOCUMENT_TOKEN_TO_BE_REPLACED

In the latest development in the decades long saga over cattle grazing in the Alpine National Park, the new Victorian government has confirmed it has stopped the grazing trial established by the previous Coalition government.

For background on this issue check here.

The following comes from Rob Harris at The Weekly Times.

END_OF_DOCUMENT_TOKEN_TO_BE_REPLACED

It’s heartening to see that the new Environment Minister, Lisa Neville, has moved so quickly on the Alpine grazing issue. The following comes from the ABC.

The Victorian Government says it will remove cattle from the Alpine National Park, despite continued lobbying from the Mountain Cattlemen’s Association.