After two great winters, we all knew 2020 was unlikely to be awesome snow-wise. But some of the early forecasts were for a ‘slightly better than average’ season. Then the snow started. We always get early winter snow in the alps, but this year it seemed more consistent. When we got that burst in late May I wondered if this was our base and it would indeed be capital letters Awesome ™

Sadly, June was different. NSW has fared better so far than Victoria, but this probably isn’t one of the winters we will reminisce about in 20 years’ time. But we will be talking about the COVID-19 lock down.

Chillfactor magazine just came out. Chillfactor – in its 21st year – is a mountain institution that has seen both fantastic and some pretty ordinary winters, and has always celebrated a broad cross section of Australian mountain culture.

END_OF_DOCUMENT_TOKEN_TO_BE_REPLACED

The Victorian Backcountry Festival will happen at Hotham, over the weekend of Sept 7 and 8. The program has just been released and is available here.

So far the program has 27 tours and workshops, from beginner to advanced, covering snow shoeing, splitboarding, alpine touring, telemark, and cross country. There will be skillshares in fat bikes, snow and avalanche safety, navigation, snow camping, rescue and a film making workshop.

The program is here. 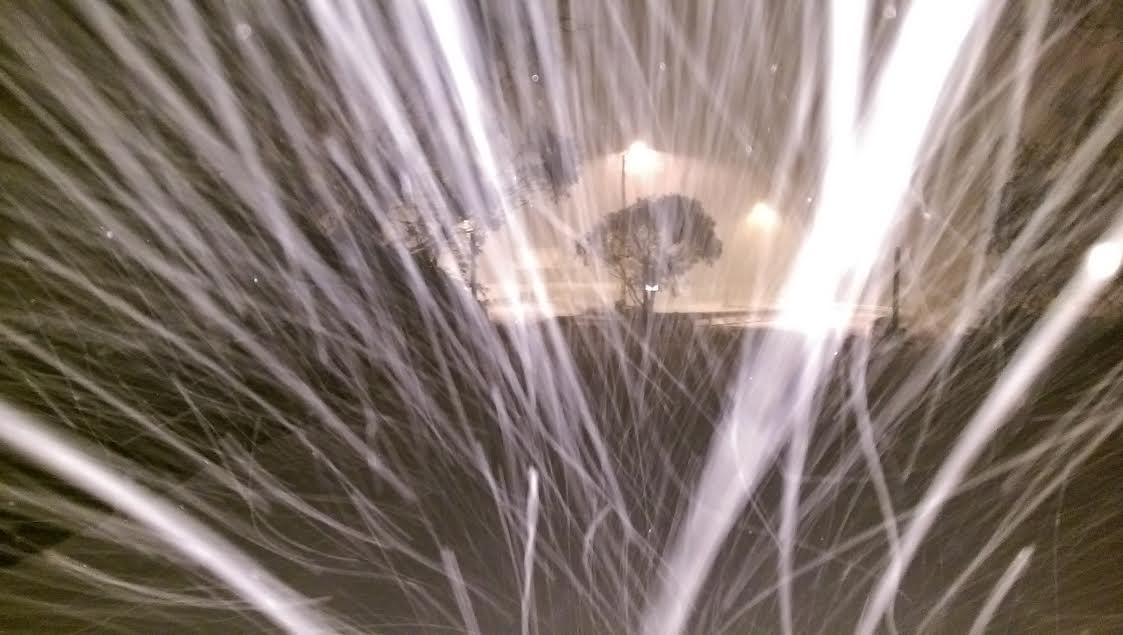 The Alps received some fantastic snow falls in the last couple of days, prompting at least two resorts to announce they will open a week early.

Perisher has announced it will open a week early (Saturday June 3). Queen’s Birthday weekend is the traditional start to the season in the resorts.

Mt Buller has also been promoting its new snow making technology. The resort spent $1.6m on its ‘Snowfactory’, which is already making and stockpiling artificial snow, and is now spreading this to create a base for operations.Mt Buller will start operations from friday night (June 2).

Hotham has also invested $4.4 million in snowmaking over the past two summers, with the new system, covering more terrain, ready to go. Most resorts have started making snow on the back of this recent weather system. There is a nice summary of how the resorts fared in terms of snowfall on Mountain Watch.

The question, of course, is: is this the start of the 2017 snow pack, or the last autumn snow fall?

Snow forecaster The Grasshopper suggests that 2017 will be a ‘slightly worse than average season’ but it now looks like we will skiing/ riding opportunities over the Queen’s Birthday weekend, at least in the resorts. And unless there is some kind of rain event disaster in the next couple of weeks, it looks like this is the beginning of the base for the season.

Reducing the impact of our snow obsession

Outside magazine recently posted a great piece on the environmental impact of skiing/ riding. Well, one particular aspect – the amount of carbon pollution we produce through driving or flying to get to ski destinations.

They tracked and collated the travel mileage during winter of their most snow-obsessed staff, then consulted a carbon offset specialist, who estimated they would have to plant 704 trees to sequester all the carbon generated.

END_OF_DOCUMENT_TOKEN_TO_BE_REPLACED

As the Alps gets another blast of pre winter snow, I’m happy to be able to tell you that we have a date for this year’s backcountry film festival program in Melbourne!

The BC festival is the annual mini film festival that covers human powered winter adventure.

The Melbourne show will be held on Tuesday May 30.

END_OF_DOCUMENT_TOKEN_TO_BE_REPLACED

The winter of awesome

The waiting is over. Winter is finally here!

Now all that’s left to do is get out into the hills.

Here’s a short list of some of the backcountry-related organised snow events that I’m aware of.

END_OF_DOCUMENT_TOKEN_TO_BE_REPLACED

Mont Equipment, in partnership with Main Range Backcountry, is hosting a Canberra showing of the 2016 Backcountry film festival on Thursday August 11 at 6pm.

It will be held at the Mont store, 18 Pirie Street Fyshwick.

Tickets are available from the Mont Shop in Fyshwick and are only a gold coin (you can give more) that will go to the Mountain Critter Cause, a fundraiser to protect the Mountain Pygmy Possum.

Tickets are limited and will go quickly, so hurry in to avoid disappointment!

Nat Segal. Greenland and the future of skiing

In March of 2014 six women set sail from Ísafjörður, Iceland with the intention of sailing across the Denmark Straight and up the south-west coast of Greenland. They hoped to explore the remote coastline, pioneer new ski descents, and collect scientific data in some of the most incredible wilderness on earth.

END_OF_DOCUMENT_TOKEN_TO_BE_REPLACED

The Grasshopper prediction for winter 2016

It’s April: two months til winter… Which gets us all thinking about what type of season it will be.

Most Australian snow enthusiasts know about The Grasshopper, who writes snow forecasts for MountainWatch (‘resident meteorology sensei’ at MountainWatch).

The first prediction for 2016 has arrived.

END_OF_DOCUMENT_TOKEN_TO_BE_REPLACED

The NSW Nordic Ski Club is hosting a screening of the Backcountry Film Festival – this Film Festival features 9 short snow and ski films selected by the American Winter Wildlands Alliance. The Festival is renowned for its mix of professional and grassroots films, from well-known filmmakers who search backcountry corners across the globe to submit their best work to first-timers who take a video camera out on their weekend excursions.

END_OF_DOCUMENT_TOKEN_TO_BE_REPLACED 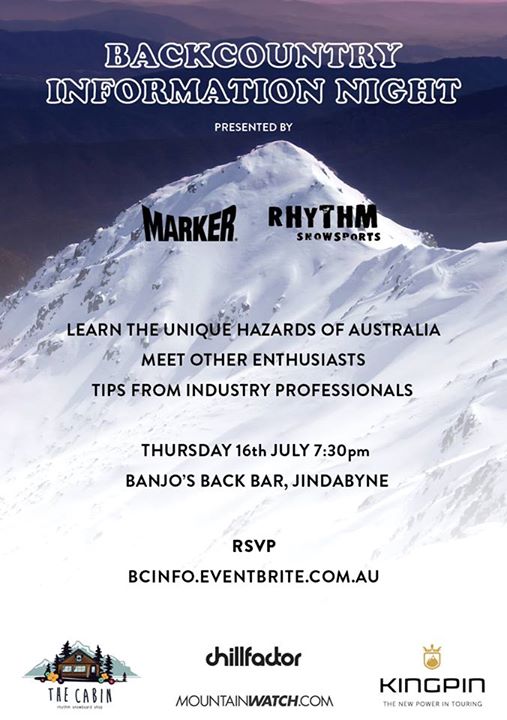 The love of mountain sports invites you and all to an Australian Backcountry Information Evening. The night is hosted by Watkin McLennan and presented in association with Marker Bindings, Rhythm Snowsports, Mountainwatch.com and Chillfactor Magazine.

The evening is for Australian backcountry skiers and snowboarders of all levels of experience and ages. The night kicks off with a short film shot on The Roof of Australia.

Following the film Bill Barker will talk about the hazards unique to the Australian mountains. Bill has been patrolling for over 20 years, is a certified guide with the Canadian Ski Guide Association, and a member of the Canadian Avalanche Association. He is the director of ski patrol at Mt Hotham and runs epic backcountry trips to Gulmarg, India. Visit www.billstrips.com. END_OF_DOCUMENT_TOKEN_TO_BE_REPLACED

We all know that women are radically under represented in skiing and boarding films. I remember posting a trailer for a film once and a friend commented “where are all the women? At home minding the kids?”. Harsh but fair. Each season brings a new round of films, but women continue to be an absolute minority in both resort and backcountry orientated films.

That is why this new production is so inspiring. Pretty Faces is “a film celebrating women who thrive in the snow”.

The film’s producers point out that women make up around 40% of the skiing population and 30% of the people watching adventure sports films. Yet only 14% of athletes in major ski films were female in this years releases. “Additionally, last season’s 14% was record female representation, up from 9% the previous season”.

The concept for the film came from professional big mountain skier and SheJumps co-founder, Lynsey Dyer. SheJumps encourages the participation of women in outdoor activities. Lynsey wanted to produce a film that gave “women and girls, young and old, a source of inspiration through a unique look at what is possible when boundaries are broken, dreams captured and friendships cultivated”.

In Lynsey’s words “I wanted to give young girls something positive to look up to…I wanted to give them their Blizzard of Ahhs, Ski Movie or High Life, but done in a way that also shows the elegance, grace, community and style that is unique to women in the mountains.”

“We see this as an opportunity to provide an inspiring documentary ski film told from a female’s perspective to connect with and celebrate skiing’s female population”.

“Although skiing is the focus of the film, we hope to showcase women’s on-hill success–from professional skiers to recreational enthusiasts–to inspire girls of all ages to pursue their dreams, walk the path less traveled, and reach their fullest potential, whatever path they choose”.

I haven’t seen the film as yet. Apart from loving the fact it aims to showcase the talents of women, I also appreciate that making the film was a collaborative process. The people behind the project did a call out for contributions: This isn’t just a project for “big-names” in the sport. We are looking for women old and young, talented and hard working, from all backgrounds to contribute to this project. Footage that oozes excitement, passion, authenticity and hard work will be considered for inclusion in the film”.

You can see the trailer here.

The film will be available for purchase shortly. Check the website for details.